Messari estimated the capitalization of Coinbase at $28 billion

The largest U.S. cryptocurrency exchange Coinbase may receive a valuation of $28.2 billion after the IPO. This figure was named by Messari analysts.

Coinbase filed a Form S-1 initial public offering with the U.S. Securities and Exchange Commission (SEC) on December 17. The timing of the IPO and its pricing parameters are unknown as of this writing.

Messari analysts built their estimate based on available public information.

The basis for the calculations was formed:

The researchers did not include card business data in Coinbase’s financial model, except for the volume of payment card opening fees received. The revenues from cryptocurrency venture capital activities, listing fees, which can reach $100,000 for ERC-20 tokens and $150,000 for the rest, as well as from stacking services also received a small estimate of less than 1% of the total value.

Messari calculates that 95% of expected revenue this year will come from trading commissions and deposit and withdrawal fees. The model assumes that each customer did so once. Analysts also assumed a weighted average trading commission of 93 basis points and trading volume in line with what Messari’s corresponding service demonstrates.

Analysts derived custodial service revenues (5% of the aggregate) based on its cost to clients of 0.5% of the volume of assets deposited, including their insurance. Analysts allowed for a $10,000 fee waiver to connect new customers with small assets to Coinbase Custody because of stiffening competition.

Analysts used the average P/S multiples of public companies that have similar businesses to Coinbase to arrive at an estimate of Coinbase’s potential capitalization. For the trading business for Golden Profit, it was 12.7x based on the Moscow Exchange, Hong Kong, Singapore, Japan, as well as the ICE and Euronext exchanges. For the custody business, the multiplier was estimated at 2x, taking as a benchmark one of the largest players in the traditional financial market Bank of New-York Mellon. 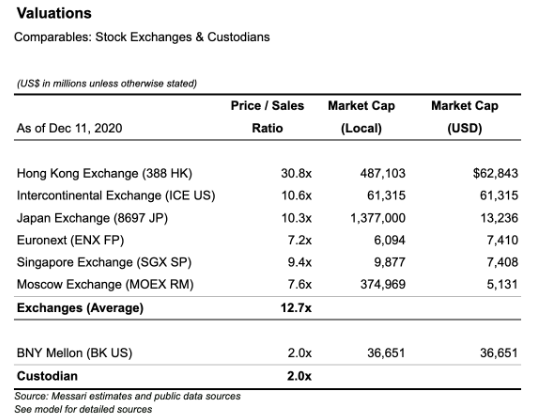 As an alternative method, Messari considered the current valuation of the Hong Kong and NASDAQ listed cryptocurrency exchanges BC Technology and Diginex, respectively. In the second case, the P/S multiple was 247x and was excluded from the calculations as a statistical outlier. In the second case, the average value for 2018-2020 was taken to get a more conservative estimate, which was 19.9x (the stock now trades at a ratio of 30x).

BC Technology is known as the operator of the Hong Kong- and Singapore-regulated institutional digital asset platform OSL, whose shareholder is financial giant Fidelity International.

Assigning a weight of 30% to the first way (by individual businesses) and 70% to the second way (as a holding company), Messari analysts obtained a $28.2 billion valuation of Coinbase. 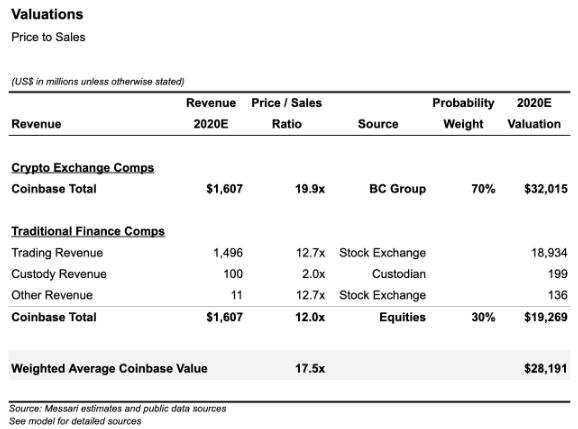 Based on the performance of BC Technology stock and the market reaction to MicroStrategy’s decision to invest reserves in bitcoin, as well as the premiums of Grayscale Investments‘ investment products over the net worth that underpinned them, analysts speculate that the valuation could exceed $32 billion at IPO.

Messari believes the Coinbase listing will be a benchmark for other companies in the cryptocurrency industry.

Recall that plans to enter the IPO is also considering the company BlockFi, working in the market of cryptocurrency lending.